Yes An Epic Can Come From Anywhere

Posted by Big M on May 26, 2014
Posted in: Uncategorized. Tagged: fist of the north star, kenshiro. Leave a comment

It occurs to me in my pseudo review of Jojo’s Bizarre Adventure that, despite my knowledge and fondness for the series I found myself at a loss for what to speak of once I was done summarizing. In turn, when I was thinking about what to speak of this week an outpour of words came when I settled on a particular topic.

With Anime North around the corner (as of this writing) I feel remiss to not speak of something Anime related so close. In turn, I feel like discussing a classic Anime. In the venerated halls of ancient works of Japanese Animation each noted entry is beloved and lambasted within the same breath. People who love the Akira film are confronted with the massive issues it has. People who love Ninja Scroll are told how the work is mostly a pulp action film with little substance. People who love Ghost in the Shell are reminded that the sequel film sucks. People who like Neon Genesis Evangelion are told that they have bad taste. People who like Lone Wolf and Cub are told that no one’s read it.

And then there sits The Fist of the North Star. 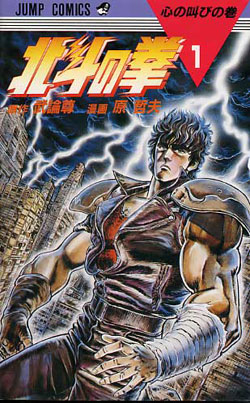 To the detractors Fist of the North Star is a proto-shonen action series with too much violence. To the supporters it is a heroic epic that deserves a place on shelves next to the Iliad and Odyssey. Created in 1983 (Hey! I was born then!) by the team of Tetsuo Hara as artist and Buronson as writer.

And if we had a full English translated run of it, we might actually be able to do that.

I can’t accurately say why Fist hasn’t gotten a better reception over here. I argue it’s because many of its anime adaptations are either too dated visually or just weren’t marketed properly against current releases.

Someone tried to have Fist do a manga run during the height of the Naruto years. Guess how that went down.

But those that have found the fan translations of the complete series and read through it are rewarded with a grand epic.

The story follows the journey of Kenshiro, the man with seven scars on his chest. The finger hole scars take the shape of the big dipper in a reference to Kenshiro’s martial art, the titular Fist of the North Star. He wanders a post-apocalyptic nuclear wasteland without a strong direction. As he does he’s shown the cruelty of humanity in the wake of the fallout as the strong prey upon the weak.

As a contrast, Kenshiro is the mightiest warrior around with his martial art able to kill opponents with a single touch and yet he is a great force of compassion, fighting for those who cannot defend themselves. Along his journey we learn his story and the many, many enemies he has waiting for him along the way.

If Fist has a fault it is that much development of characters is done in flashback, typically after a large amount of exposure has occurred with that character. This typically happens to bring to light reasons behind certain character inconsistencies.

That said, many of these flashback revelations add immeasurable depth to those characters and is largely the reason why so many side mangas of the story exist.

The violence in the story could easily earn the marker of gratuitous but it serves a purpose. In the manga no reservations are held about the brutal conditions humanity must live under in this world. As a result, violent acts are commonplace but displayed as still monstrous. Conversely, Kenshiro returns that violence upon his enemies without hesitation. He only weeps for those fallen who have virtue in this savage wasteland.

Against Kenshiro stand other masters of martial arts and how they’ve chosen to carve out empires in this time. If one looks upon this work without patience, many of the character turns are silly and overdramatic. When taken as being played straight they are strong characters with complex motivations and tightly interwoven backstories. Even if a lot of it is done in post.

The visuals, heavily inspired by the Mad Max films are just, just amazing. I’m not even going to write about it. I’m just going to show you.

Do you even see this kind of work anymore?

Everything is drawn with a meticulous detail that is so consistent that the entire twenty seven volume run’s artwork should be revered. Period.

It is a work where the phrase “To think that I could still shed tears…” holds immeasurable meaning when uttered by the tyrant king Raoh evoking a life of brutish dominion cracked by a single profound moment. I may love Transformers and argue until I die that it holds great gems in its legacy but Fist of the North Star is a work that transcends itself.

It isn’t a work with great nuance and it wouldn’t make sense to be so. The large amounts of violence and the massive moments of expression border on farcical to the eyes of a more cynical audience. Adding nuance would be pointless.

Conversely what might look like a violent action manga on the outset somehow cobbles into an epic of a journey. That can be owed, largely to the constancy of the narrative. There is never a point where life and death struggles do not occur. The world is savage and survival is difficult for the meek. As a result you see people pushed to emotional extremes and the true nature of their character is revealed in these moments.

Against that Kenshiro serves as the judge. Despite his own desires his true purpose is to administer justice in this world. On one hand it’s a shallow reality, on the other it’s an interesting take on the hero slowly coming to terms with his destiny.

And it isn’t portrayed that Kenshiro ever shies away from a moment of conflict, but we do see his regrets often in the loss of lives of the men he respects. He’s known to weep when seeing tragedy.

Which abounds in this setting.

As a result we have a work that reaches a great dramatic height. Its enduring quality allows us the existence of a pure and true epic in an age where such things are met with mockery and cynicism.

While the merit of the work is arguable, the circumstances allowing it to be considered an epic are unique to it. That it could earn that reputation from fans is a testament to those circumstances.

And so too does this work exist.